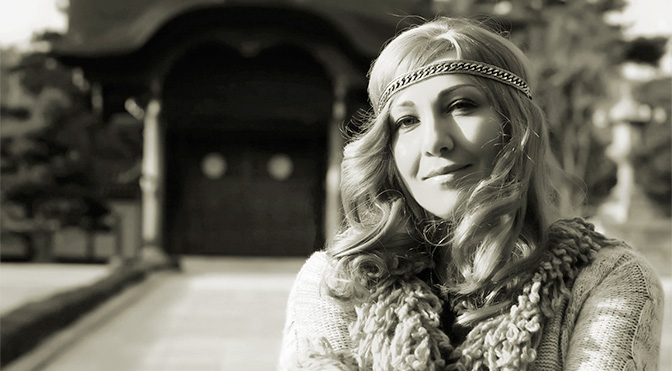 She went to Japan in December 1990 to participate in several festivals in Sapporo and met Nobuhiko Takahashi  from ROAD & SKY and signed a contract that will last for the rest of her life. In order to start working on her very first album, Origa, she moved to Tokyo at the beginning of 2013. While the producers, arrangers and musicians will change many times depending on her works, all the songs from her albums were always composed and written by Origa herself. One of the only exceptions is the traditional Russian songs  she was regularly rearranging in her albums.

Most of her songs were written in Russian, especially during the first 10 years of her carrier. Despite that her 4th album 永遠 [Eien] (Eternity) made it through the Japan music charts (ORIKON), probably thanks to the song Polyushko-Pole used in a Japanese TV program. She started becoming more popular in Japan and released a first best-of album in 1999.

After a long maternity leave she performed some songs written by Yoko Kanno for the anime Ghost in the Shell: Stand Alone Complex including the first opening Inner Universe which made her popular throughout the world. She started performing more and more at anime conventions while participating in various projects often related to anime or games.

After having live for around 20 years in Japan, she moved to Vancouver in Canada around the beginning of 2011. She had a significant loss of weight after undergoing surgery due to breast cancer in 2013 and becoming vegetarian, but kept preparing a new original album and a 20th anniversary album. She passed away in Japan due to heart failure on January 17, 2015 where she came to work on her albums. Those 2 albums were released on October 21, 2015.

Yoko Kanno happened to be the pianist on Origa first album where she played the piano on 5 tracks. The album booklet is not precise enough but I'd say she also did the piano arrangement for at least ぱにまゆ～私ダケニ判ル～ (Panimayu ~Watashi Dake ni Wakaru~) [Panimayu ~It Makes Only Sense to Me~], an awesome song to mark the beginning of a rich collaboration.

She arranged another piano song on Origa's 4th album Lyre, 呼ばないで (Yobanaide) [Don't call], which is as beautiful as the first song.

She will finally arrange and also write this time another piano song on the mini-album Songwreath, Cradle, Cradle, in 2008.

Yoko Kanno first wrote a commercial song performed by Origa in 1999 for JR East (Shinkansen). This song is still unreleased.

In 2006 she performed another song for the Toyota Lexus LS460, Exaelitus, released on the album Yoko CM.

Finally a third CM song was written for Sekisui House in 2009. It's still unreleased too.

In 2002, she recorded different songs written by Yoko Kanno for the anime Ghost in the Shell: Stand Alone Complex (including the movie):

Origa became famous in the anime sphere thanks to those songs and regularly performed them at anime conventions.

Before performing Inner Universe, Origa performed the song Moon at the Turn A Gundam concert in Tokyo in November 1999.

She performed a second time in June 2006 in Seoul at the Ragnarok Online 2 concert along Mai Yamane and Maaya Sakamoto:

She performed one last time in July 2009 at the Super Dimensional Star Festival Sonic concert in Tokyo:

Origa seemed to treasure these memories:

Yesterday I went through some old boxes and found a few interesting things. Among them, some cards with pleasant memories.

To Origa,
Thank you so much for your amazing voice!
I love you!
You're my aspiration!
Let's do it again!

We can still hear your pulse

First I really recommend you to listen to Origa's original albums, you'll see that beside being an awesome singer, she was also a very talented composer (and probably a talented lyricist too).

She was a musician with a strong sensibility as she was able to write and perform music genuinely and in a very organic way: the music she wrote and the way she sang were kind of unique and personal.

I'd like to believe she's now a model to any musical artist. She left us plenty to listen to and she'll stay forever in our hearts.

Origa, thank you so much.